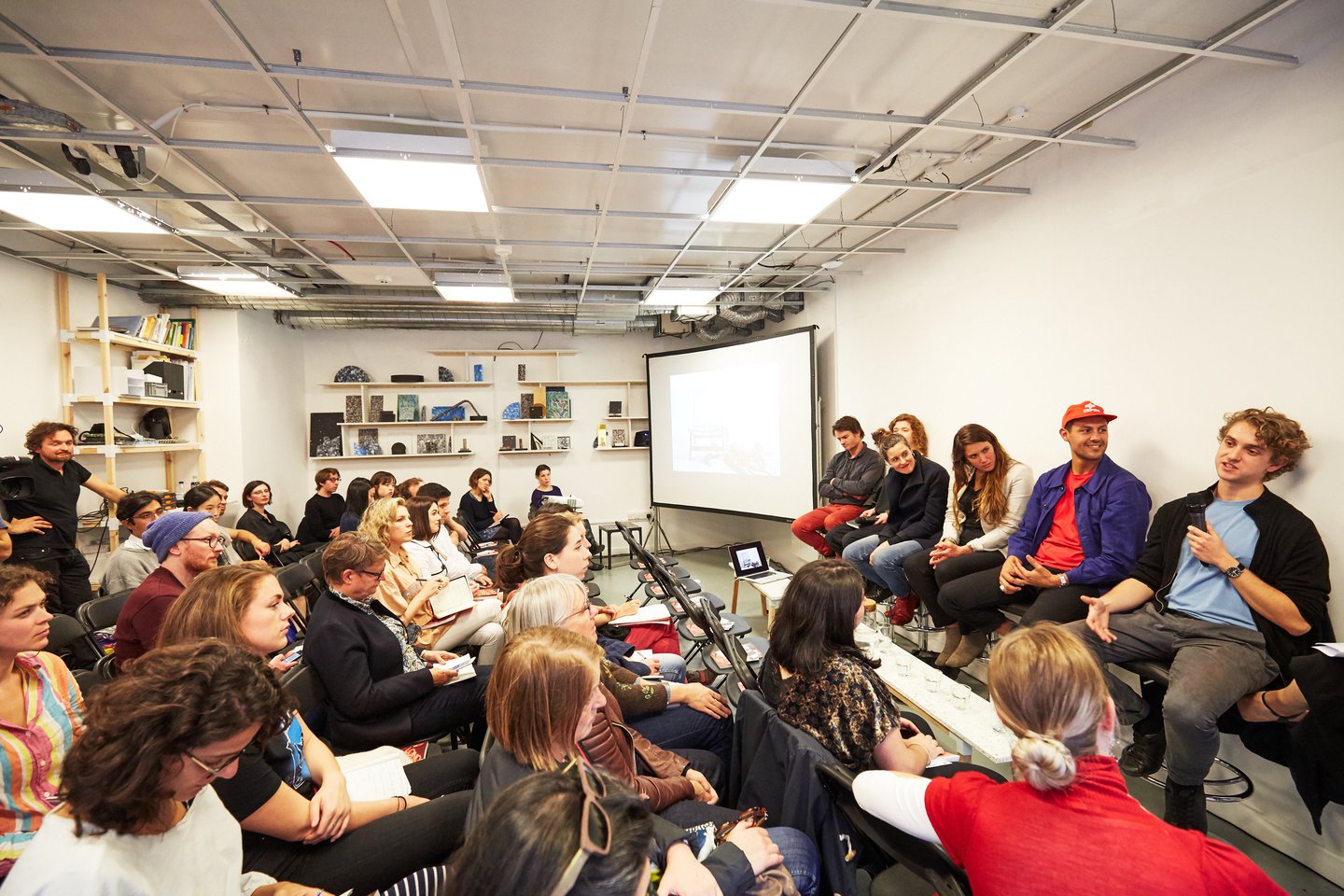 Re-Make: A discussion on recycling in design

Having been making 100% recycled plastic surface materials for over two decades, Smile Plastics is not new to the debate surrounding reusable materials.

As a stalwart of the circular design ethos, it was fitting for the company to open its doors and invite the design world in, to extend the debate further.

Teaming up with fellow London-based studio Material Driven, a company whose own ethos is centred upon the legitimacy of how materials are made and used, the space played host to Remake during the London Design Festival. As an exhibition Remake offered a space in which to showcase and celebrate designers that utilise waste materials.

The panel discussion, which took place on its opening night, sought to extend the question of how the principles of circular design are being practiced by designers, how the resulting surface materials and products are being responded to by users as well as what else could be done to move us further away from the damaging principles of the ‘take-make-dispose’ culture that we have become inadvertently accustomed to. 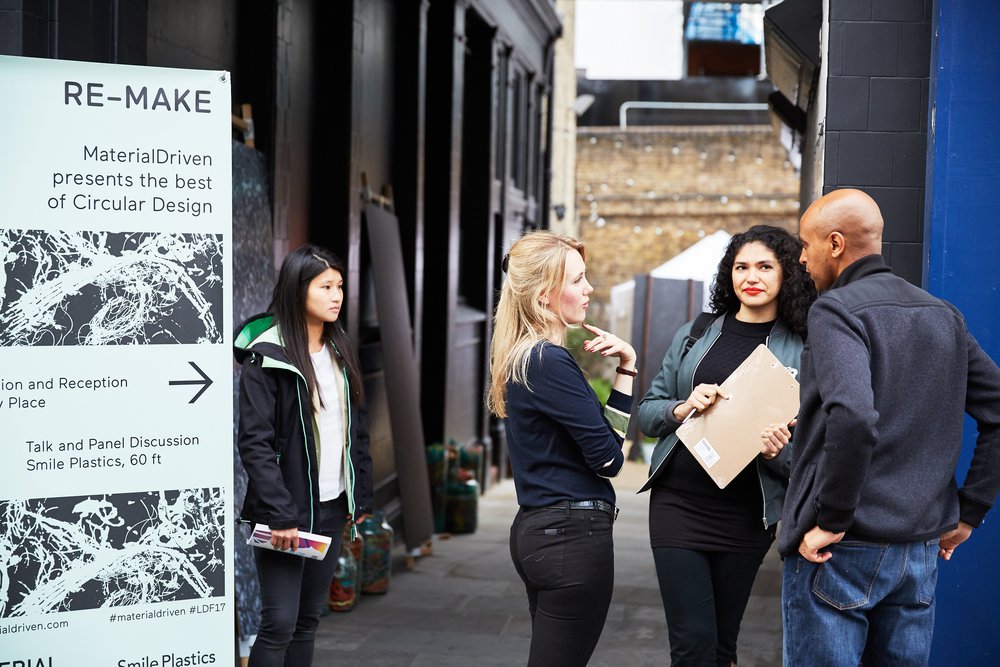 Featuring designers Ariane Prin, Carmen Machado, Conor Taylor, Jorge Penadés and Smile Plastics, the talk covered the same ground that we have been discussing while exploring our current theme Remake/Reuse. Perhaps as a result of this recent research I found myself, at certain points, wanting the conversation to go further. There almost seemed to be a ‘preaching to the converted’ undercurrent to what was unfolding. It seems so blatantly obvious that we should all be doing as much recycling as we can, that products that reuse waste should be celebrated and that the whole process should be getting easier. 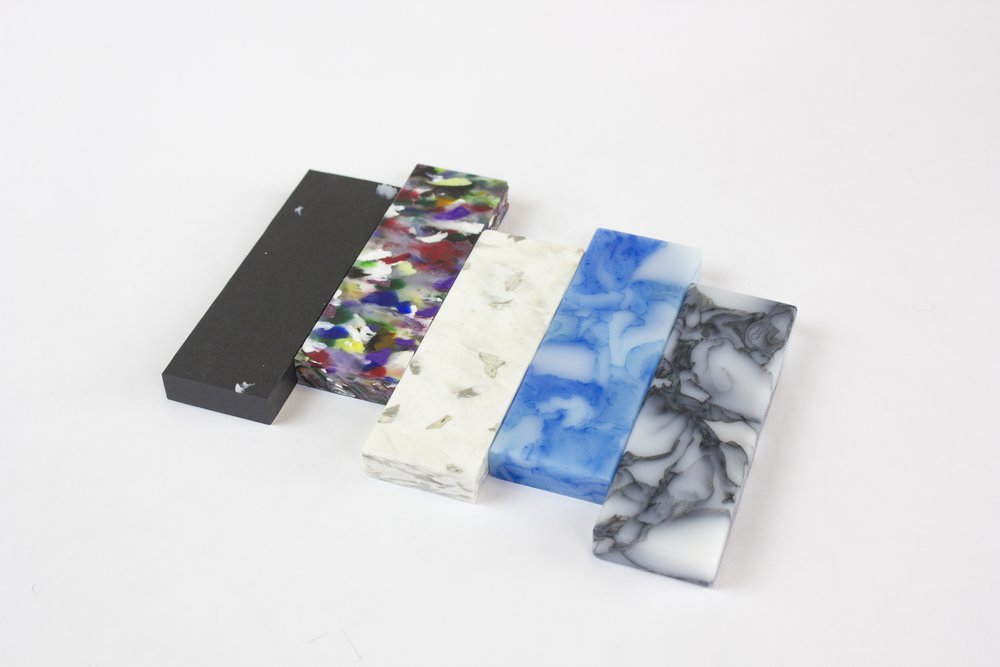 Yet the testament of all of the guest speakers, designers and makers who actively choose to utilise and reimagine waste materials for practical use, highlighted that perhaps the belief that all is well and straightforward in the pursuit of recycling is in fact wide of the mark. As I listened and remembered that my own local council does not offer any form of plastic recycling, and considered news articles and warnings that unclean tins and glass jars may not even make it into the stream of reconstituted materials, I really began to understand the uphill struggle that still lies ahead for designers.

One key section of the debate, which extended to the audience, was the question of why a user wouldn’t simply continue to choose surfaces or products made from ‘virgin’ materials over those with waste content. Why not use an ‘off-the-shelf’ material that is fit for purpose, why go to the effort of reconstituting rubbish? 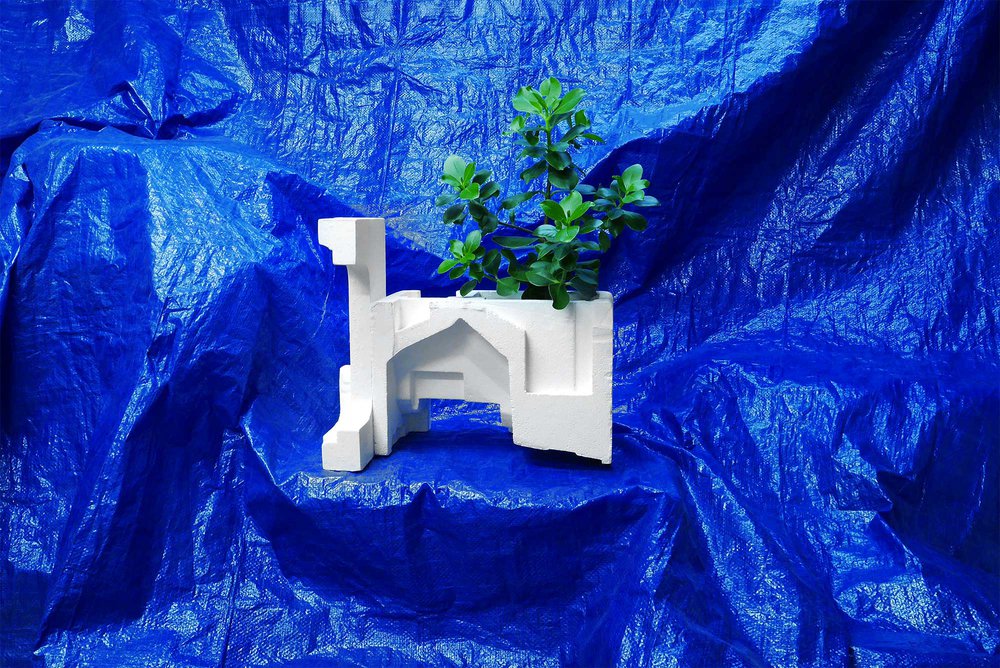 Many of the people present in the seminar have grown up in an age of inbuilt obsolescence.

Products are invariably made with a predetermined life cycle whereby elements within the design will fail, perish or stop working altogether. It’s an economic system that has become industry standard and helped to cement the 'take-make-dispose' culture that nearly all of us operate within, often obliviously.

There are also very useful and affordable materials out there, and the convenience of them, coupled with their practical characteristics does indeed mean that they are fit for purpose and will take time to be removed or better still, replaced within the design processes of a product.

Take Polystyrene, for example. The lightweight and fully formable polymer was identified as the ultimate protective packing material very early on in its history, which began in the middle of the twentieth century. The major problem being that once you’ve removed your TV, toaster or microwave from the box, there are no means to recycle the protective white shell it came in.

To add to this, the lightweight nature of the material means it often gets blown around and will invariably end up bobbing around in the ocean. Even still, if it ends up in landfill it will stay there for hundreds of years, and in both cases, has the high probability of getting into the food chain. Jorge Penadés series Paraphrase extends some of the ideas first outlined by Max Lamb’s Poly Furniture project. Both take waste polystyrene and give it a new, functional purpose. 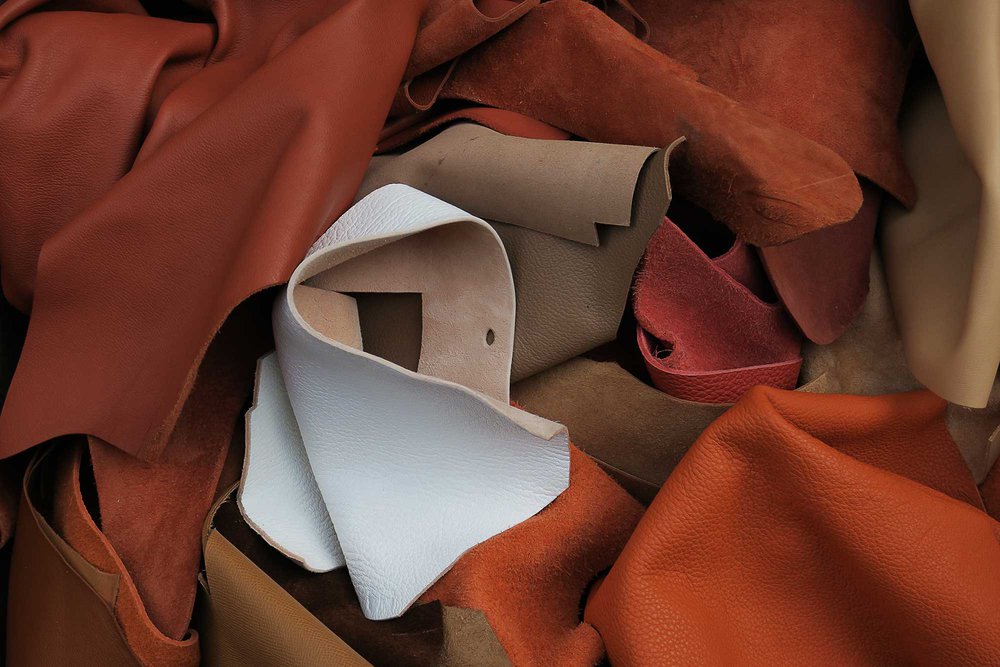 But Penadés, a designer who also recycles leather in his Structural Skin series, was quick to point out that he regularly has to grapple with the concern that his approach could be misconceived as a narcissistic one.

As he said, his work seeks to “offer an alternative, not a solution.” But Adam Fairweather from Smile Plastics pointed out there is a need for designers and consumers alike to remember that whilst we might all, at times, feels like we make little impact as individuals, there is the potential of the "compound effect” of our individual choices.

It’s a point that is underlined by the work of textile designer Carmen Machado who began making woven textiles from yarns created out of ‘ghost nets’ she found constantly washed up on the beaches of her native Puerto Rico.

There is also another element at play here, and one that may not be as or even at all present in products made from ‘virgin’ materials. The narrative of re-made materials is unique; there is a story to be told. Why the materials look the way that they do, how they have been made and where they came from and how they were sourced are interesting and engaging elements to any prospective consumer.

The craft, the endeavor, the trial and error and the moral aptitude involved in making them often remains present on the surface itself. Ariane Prin’s tiles and vessels are a prime example of this. Sourcing metal fillings that would ordinarily be leftover from the key cutting process from local locksmiths, she has combined them with Jesmonite to create oxidized surfaces. Each has its own unique colouring and sense of time about it, and no two are ever the same. 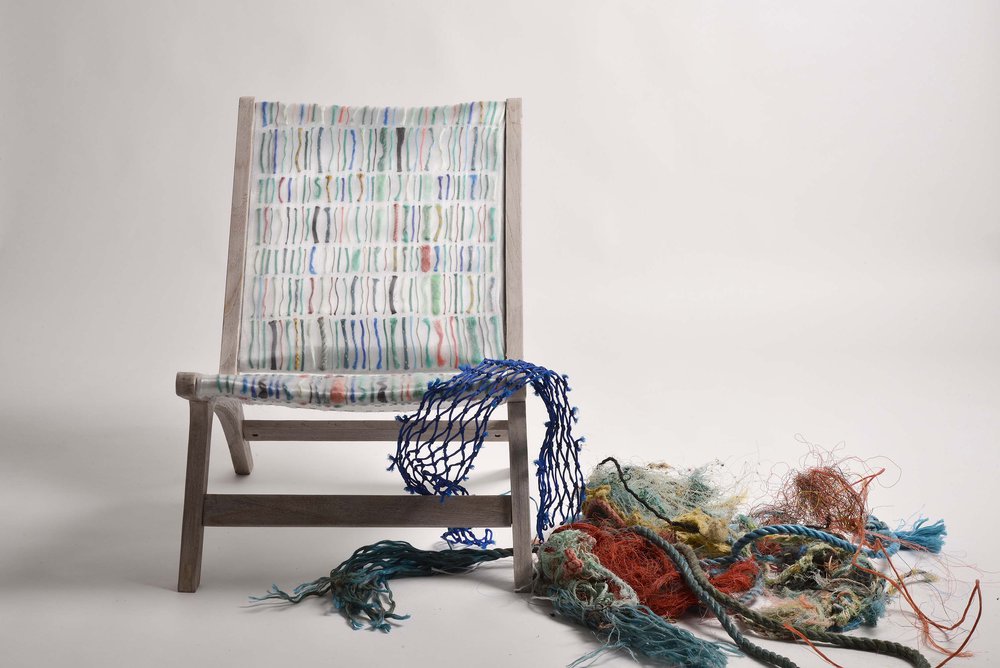 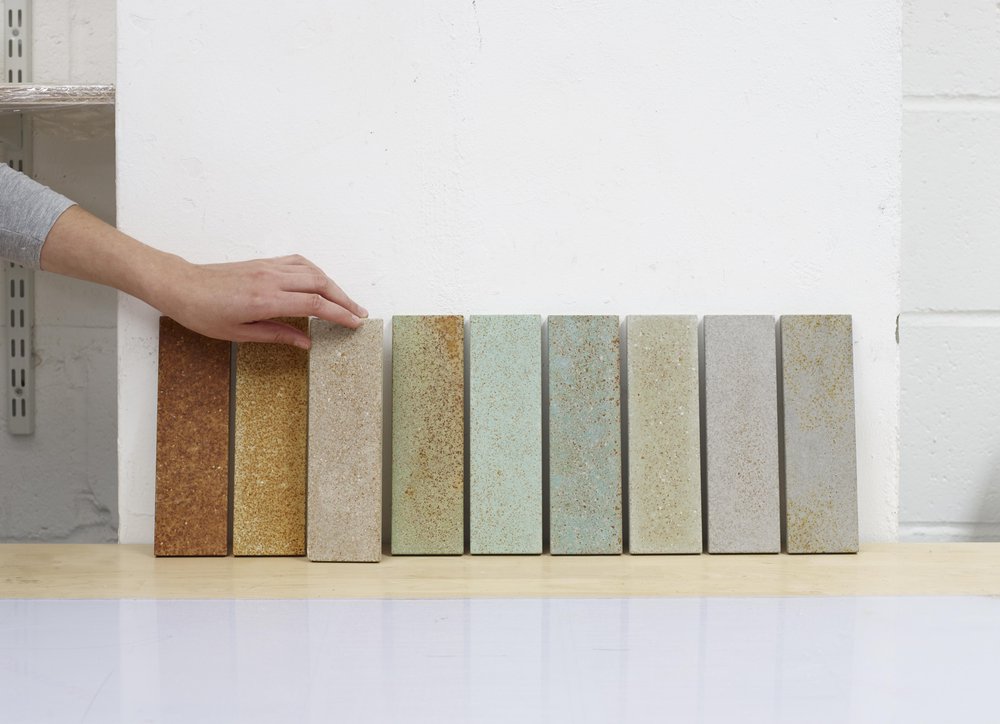 Once again, another central argument in favour of reusing waste materials is highlighted. For all of the companies featured, the design process, one that is very much carried out by a human, for other humans, is fundamentally a carefully crafted one that elevates the value of the waste materials.

The very apparent sense of transformation, coupled with the time and energy involved in making that happen can be a coveted commodity, particularly now, when time itself and with it ‘experiences’ are becoming increasingly valued in themselves.

Rosalie McMillan from Smile Plastics, who is also a jeweler, made an interesting parallel with regards to the perception of materials. Pointing out that we have long been conditioned to associate precious metals with great value and wealth, she sees no reason why in the future, we might not see recycled materials in the same way.

That may still be some way off but it is a salient point. The elegance and familiarity of the patterned surface that Conor Taylor’s Foresso; the first ever wood terrazzo, creates makes them feel luxurious and of high value. The fact that the shards of wood encapsulated within the coloured resin are saved from scrap adds another layer to the narrative of the surface. 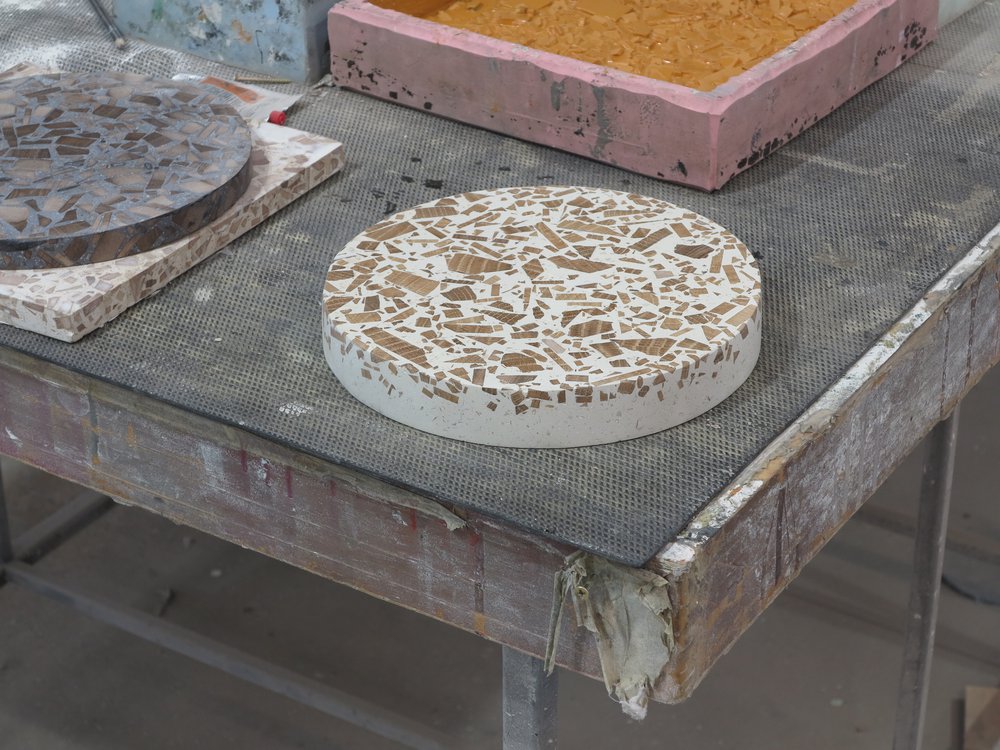 All of the materials and products shown and discussed at Re-make exude a new, heightened sense of value. They are rich in narrative and one that is very much about saving materials from being incinerated or going into landfill or the ocean, as well as the craft involved in producing them.

Both things should be recognised and celebrated. For the most part, they are all still made in small volumes; there is after all reliance upon the designer themselves and perhaps a small team to produce them at this stage. But they all offer a step in the right direction and one that big manufacturers as well as governmental institutions can perhaps take more note of. And hopefully understand the value of.